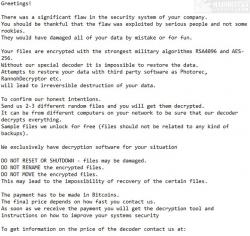 LockerGoga was first identified in early 2019 and had successful large-scale attacks against US and Norwegian companies. It has infected numerous people, companies, and municipalities worldwide with a monetary tally of over $104 Million.

On an infected system, the LockerGoga appends files with a ‘.locked’ extension. With the release of this tool, You can now recover your data for free. In the thumbnail, you will see an example of a ransom note.

Below you will find step-by-step instructions for using the decryptor in both single-computer and network modes.